TTT: How About "Sea" You Never?

Thankfully for me, I'm pretty picky about what I read. And by that, I mean, I don't tend to pick up things that I am unlikely to enjoy or at least find okay. It's very rare that I actually hate a book. That brings me to the subject of this week's fun topic from That Artsy Reader Girl's Top Ten Tuesday, which is:

April 6: Books I’d Gladly Throw Into the Ocean (submitted by Beauty & Her Books)

So, that being said, even on this list there are only a handful that I actually hate. Here's what I came up with this week! 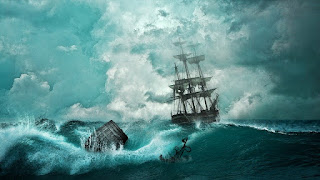 1) The Catcher in the Rye by J. D. Salinger
No, I didn't have to read this for school, I read it voluntarily and still hate it with a passion. Top five most hated books I have read, and I legitimately couldn't find a single redeeming quality in it when I read it. I have heard some people say that it depends at what life stage you read it...but I don't think I ever hit the right one that would have let me appreciate this book.

2) Fifty Shades of Grey by E. L. James
I'm sorry, but when you take out the woman's tampon for her to then have sex...I am so out. No, I have not made it the whole way through this one, but I've read enough of it to want to purge it from my memory.

3) The Bell Jar by Sylvia Plath
Perhaps one day I will try this book again, but I highly suspect that I will move on instead to other things that at least inspire some feelings other than extreme boredom and irritation. So frustrating, since some of her poems highly impacted me.

4) Losing Joe's Place by Gordon Korman
Perhaps I hate this book (and I do), or perhaps I just hate that it was read out loud to our class in eighth grade by a teacher I despised when I had a university reading level. Your call on that one ;)

5) The Handmaid's Tale by Margaret Atwood
Do I hate this book? Yes and no. I love the idea of it so much, but I seriously despise Atwood's writing. And not just from this book - I have read some of her essays as well.

6) The Other Side of the Bridge by Mary Lawson
This might not be fair to the author, because the book was "okay," but I had to study it to death, and analyze everything, and that destroyed any possible redeeming qualities of it. I can study books generally, but it just didn't feel like there was enough going on it in to justify the level of analysis we were required to do, so it left a sour taste in my mouth.

7) Go Ask Alice by Anonymous
Although this book is supposed to show a girl's descent into the dark world of drugs, I just felt like not only was the writing poor, it didn't feel authentic, and it really wasn't effective. I honestly found it punishing to get through, and got rid of my copy almost immediately after finishing it.

8) Allegiant by Veronica Roth
I know you might be surprised by this one, but honestly, it's mostly because I figured out the ending on...the first page. Literally. Trying not to spoil it for anyone, but yeah...not subtle. And I just felt like this book "diverged" (I'm sorry) so much from where the series started as, that I didn't recognize in it the things I had enjoyed about the series in the first place.

9) Forever in Blue by Ann Brashares
I absolutely adored The Sisterhood of the Traveling Pants, and very much enjoyed the other books in the series as well, but this one damaged the other books for me, and so I like to forget about its existence (let's not even start talking about the books she wrote after). Although there were some choices the author made in this book that I don't agree with, I at least understand, but there are certain characteristics that some authors use in YA fiction that drive me completely insane, and this one not only had a big one, but it overused it as well.

10) Never Let Me Go by Kazuo Ishiguro
The reason I've decided to put this book on the list is not because I hate it, but rather because it was such a massive disappointment to me. As a reader of science fiction and dystopias, I really loved the concept of this book and wanted to delve right into it. I just felt like it never was truly developed. Things were shrouded in mystery, but there was never really a proper answer to anything. Now, I understand that we don't get to know all of the answers sometimes, and have to accept that, but it didn't even feel like that was what the author was trying to do...it just felt, flat. I never really cared for the characters or anything, and just wondered really what the point of the book was in general.

Tell me, what are some books you hated, or were some huge disappointments?