In light of the recent news that Kazuo Ishiguro was awarded the 2017 Nobel Prize for Literature, I wanted to share with you a few of my thoughts.

First off, I want to congratulate Mr. Ishiguro on the honour. This post in no way intends to be an opinion on whether or not that accolade was deserved, and is simply my experience with his work so far.

Like a lot of people, my first experience with Ishiguro's work was when the movie of Never Let Me Go came out. Being a huge fan of dystopian literature for many years, especially those with a dark or twisted element, this seemed right up my alley. I think I might have missed a few minutes at the beginning of the movie, but otherwise I watched it the whole way through.  I'm a huge fan of Carey Mulligan and Sally Hawkins, and enjoy many things that Keira Knightley has done, so the whole thing seemed really promising.

Conceptually, I enjoyed it. Yet I felt a lack of an emotional connection to the characters, except for the mild "person on the outside" feeling that Kathy and I seemed to share. But I was not satisfied with this - perhaps something was missing from the adaptation (moments cut out, beautiful prose untranslatable to film, etc.) that just didn't give me the full experience. So I endeavored to read it. 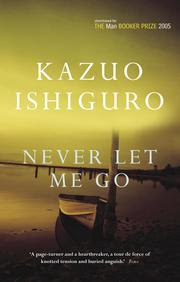 Here's what I found:


My overall feelings towards this book are mixed. I loved the idea of the story, and where aspects of the plot went. I was disappointed, however, in the lack of development in many areas. I just felt consistently that it didn't go quite far enough for me to be properly connected and invested. It's the sort of novel I will likely try to reread at some point. Perhaps I had unrealistic expectations for this book based on what I knew about it before picking it up, but it just didn't hit home for me.