First of all, this post will essentially be Spoiler Free, however comments by other users may possibly contain information that spoils portions of the plot, so read at them your own risk. Ready? Here we go! 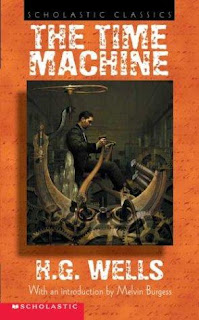 H.G. Wells, known for being one of the defining writers of science fiction, is probably best known for his novels War of the Worlds and The Time Machine. Never having read any of his work, I figured it was time to give it a shot.

A Victorian gentlemen builds a time machine and travels to the year 802,701 AD to discover the future of the human race. Upon his travels he discovers not only the gentle Eloi that live in the daylight, but the Morlocks that live below. Yet the language and culture of both these races are so different from anything he could have expected. When his time machine goes missing, how will the Time Traveller find his way back home?

Why it's worth a read:
Where it disappoints:

If this is your first science fiction novel, I would highly recommend putting it down and coming back to it later. It's not a difficult read in either concept nor execution, but the prose is dry. If, however, you like things that are quite literal (such as if you like non-fiction), then I would bet this is right up your alley. Although Wells's writing style here was not my favourite, I didn't dislike the novel as a whole - it just wasn't what I was exactly expecting. Having a bit of familiarity with science fiction, I was able to get past a few things that I might have otherwise found difficult to get through (such as the slow, explanatory beginning), however it did also cause me to be a bit biased in expecting  a similar feel to other novels I had read. Oh boy was I wrong. If you really want to experience the full scope of what science fiction has to offer, this is a must-read, and not a long one at that. I'm interested to look into a few of his other novels now that I know what to expect, but I definitely wouldn't try reading this on a long plane ride.